The recent opening of the Postal Museum in a space previously used by the Philatelic Foundation as a storage area, has provided the Foundation with the opportunity to put on display, material that they have been accumulating for over  thirty years.  Some of this material was on display in the property owned by them in Worcester St, but has not been displayed since the move to Mandeville St in 1998.

Whilst it was not on display that did not stop the interest in adding material to the collection, and most of the material has been obtained since 1998.

The material on display is the property of the Philatelic Foundation Christchurch (Inc), [except in a small number of items, where other ownership is indicated.]

Most of the Post Office furniture items and stamp vending machines were donated by NZ Post when the former Chief Post Office in Cathedral Square was being vacated, and from a Post Office store in Selwyn Street, [Christchurch]. 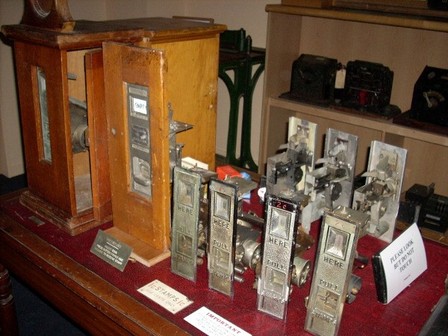 The enamel metal signs have mostly been purchased by the Foundation since the late 1970’s.

Most of the franking machines were donated by Office Appliance Company; the partial experimental ones were given by Mr C R Hawkins.

Along with the 3 dimensional items on display, a number of paper items have been accumulated, and so a multi-drawer plan cabinet has been purchased to accommodate these items. Fortunately a wooden one came on the market that was in keeping with the other display furniture, and these paper items are gradually being put into acid free sleeves so that they can be viewed, and used for research etc.

In addition to the alcove containing the postal items, additional collections are housed in four display cases at the opposite end of the meeting room. These  contain an almost complete collection of money boxes issued by the POSB; date stamps; weighing scales; stamp printing plates for both issued stamps and some essays of the 1930’s; the box that the Postmaster General took to Parliament, and his brass seal.  Another case currently houses some commemorative Post Office related items – china etc, and room for temporary topical displays.

The Foundation would be pleased to accept further items for this collection – if you have anything that may be suitable please contact the writer.

It is intended that from time to time the full history of some of the items will be published. 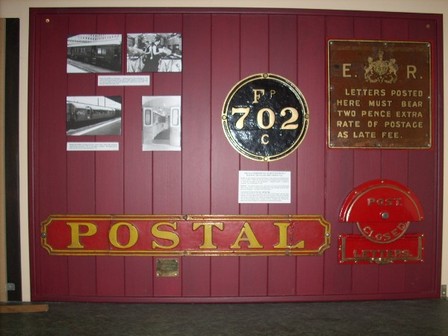 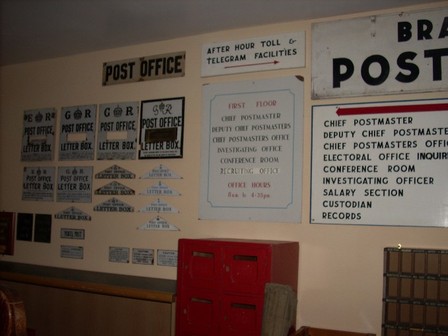 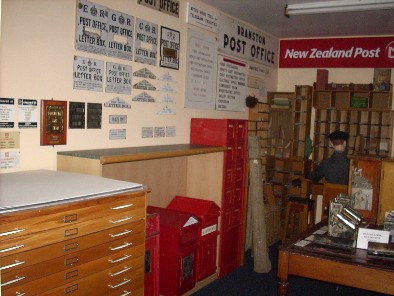 This postie is not in danger of job cuts..